How to tackle Cultural Response Bias in 2022 While choosing a consumer research methodology, it is important to keep in mind that the respondents are mere humans with their responses prone to being corrupted by bias. If neglected, it can massively undermine the validity of conclusions and paint a false picture of projected success.

For example, this was witnessed when the sales of Pepsi’s Crystal Pepsi plummeted due to consumer confusion. Consumers did not understand why Pepsi expected them to pay more for a drink that is identical to Pepsi, except this one was transparent . To tackle this kind of market research disconnect in a culturally diverse world, Cultural Response Bias needs to be taken into account while selecting your target audience.

So, let’s get out of our Surveymonkey mind and dive in.

In this article, we cover it all-

What is Cultural Response Bias?

This term refers to the biasness that stems from respondents belonging to different cultural settings, mostly observed when they are exposed to attitudinal questions where response scales are used (for example, the 5-point Likert Scale or the 10-point end-anchored scale).

Cultural influences that may lead to Cultural Response bias include[1]: Components that influence an individual’s response

The answers given by the respondents are subjected to multiple variables. It is very difficult to reliably gauge whether disparities are the result of true differences in the performance or cultural response styles. The 3 most predominant response tendencies are-

Respondents feel inclined to agree with survey questions or respond positively to questions irrespective of content.

Some respondents feel inclined to answer all questions negatively, irrespective of content.

A number of studies have observed that there are substantial and systematic differences in response styles between countries. Tellis and Chandrasekaran’s - Does Culture Matter? Assessing Response Biases in Cross-National Survey Research, remarkably presents some patterns observed across 15 countries, including [2]-

While evaluating the results of the quantitative consumer research study, a straightforward comparison of the results across countries can lead to erroneous conclusions and be misleading, such as-

How to tackle cultural response bias

Tackling cultural response bias can help predict and evaluate both the actual penetration at the aggregate level as well as individual probabilities of adoption, and should be taken into account while conducting quantitative surveys.

Using technologies like facial coding, eye tracking and voice tonality mapping can reduce the biasness involved in traditional quantitative and qualitative research methods. It taps into the subconscious mind of the respondent and thus reduces dependency on stated responses alone.

Testing out your survey questions before a full launch can help pinpoint survey questions that may leave space for the cultural response bias to creep in. For example, the way in which a question is worded can leave the question open to interpretation.

Getting an insight on how your competitors are going perform will help avoid the use of absolute scores. Using benchmarking, the performance of your brand can be compared with other relevant brands based on the demographic chosen by you.

Administering surveys in the respondent’s native language, rather than just English reduces the negative skew caused by cultural response bias. This leaves less room for the respondent’s understanding of English and enables the respondent to respond without any apprehensions.

Worded Scales involve a list of words, phrases or statements and are less prone to interpretation than numerical scales. A number scale is very subjective to the respondents and leads to respondents with the same opinion potentially selecting different categories, creating room for Cultural Response Bias to alter the survey results.

Some demographics are more vulnerable to certain types of bias. Paying attention to ‘who’ and ‘what’ you are asking, reduces the chance of Cultural Response Bias to tweak the responses given by the respondents. 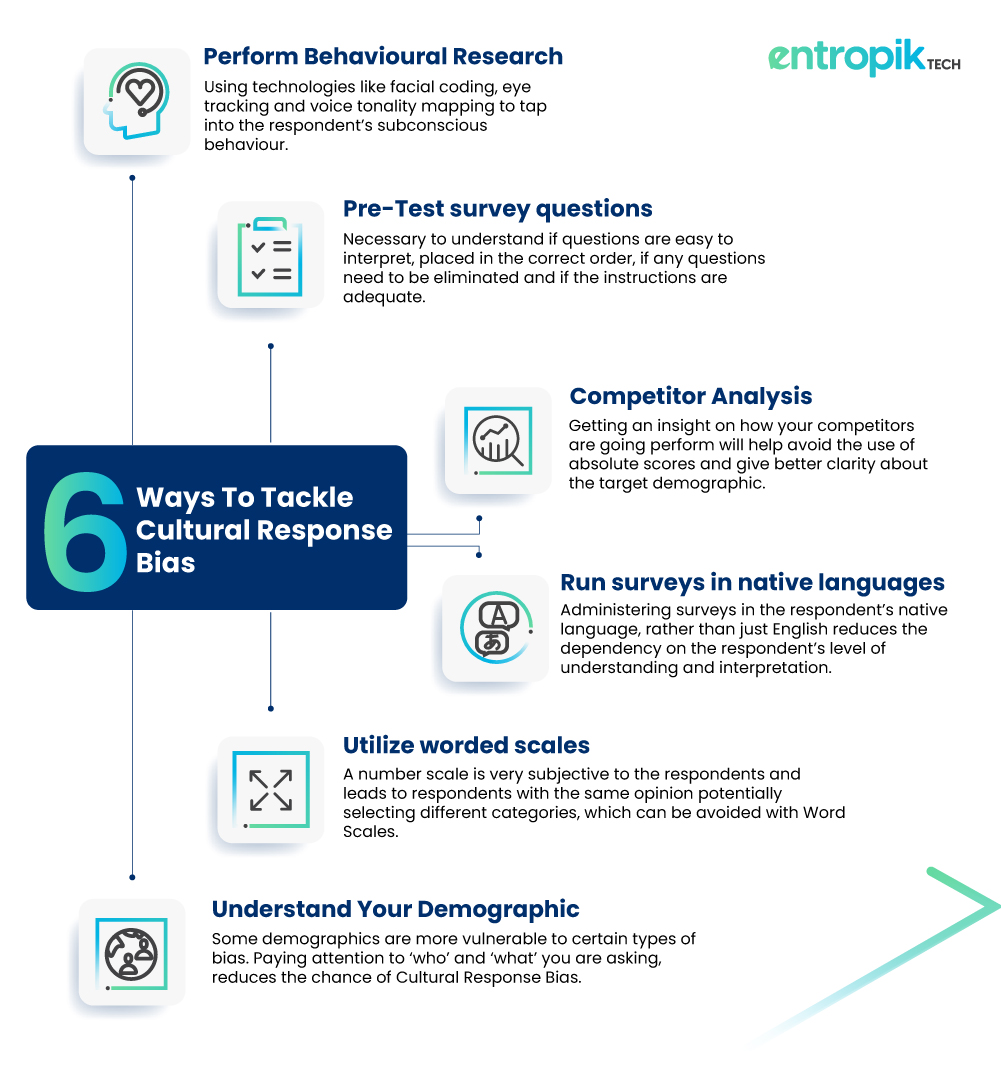 In this era of globalization, it is an absolute necessity to have a bullet-proof consumer research strategy. Conducting market research without keeping the consumer’s mindset and values into account can backfire massively, affecting not just revenue but also leaving consumers sceptical and confused. This leads to huge market research disconnect which is very difficult to recover from.

Hence, understanding the consumer and measuring the impact of Cultural Response Bias in your research is a crucial parameter that cannot be missed. It not only helps you keep pace with the ever evolving mindset of consumers but also helps you strategize , become more customer centric and build a positive brand image.

Using Entropik Tech’s quantitative and qualitative research platform you can tackle response bias with ease. It gives you access to not just Emotion AI technology for performing behavioural research, but you can conduct preliminary tests, utilise the global emotion benchmark score for better competitor analysis, run surveys in over 17 languages and use over 22 survey question types, to understand what works best for your research study.

Author Bio: Tanvi can usually be found anxiously treading the office floor to get her content reviewed, here at Entropik. When not absorbed by researching and writing, she loves to read, go for a swim, play badminton, paint, and otherwise spend too much time bingeing on the Office and cuddling her German Shepherd, Whiskey. An absolute foodie, she would love to cook and bake for you and even give you the best dessert suggestions in the office. How Investing in UX Research Can Improve Your Bottom Line A Marketer’s Guide to Consumer Research